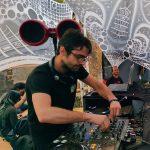 Renato Moreira, aka LAB was born in Lisbon, Portugal during the ’80s.

He gained his first taste of music production in 1998 when he began to experiment with Rebirth, FL Studio, Cakewalk Sonar, and Ableton; eventually deciding to settle with Cubase as his primary daw.

With such a diverse background producing various genres of music such as drum n bass, house, breakbeat, downtempo, chill out and dark progressive, LAB has impressively established and released under three different aliases including Unikorp, Bosmer, Kid Reaktion, and multiple other collaborative projects.

He quickly started to share his full live sets in 2005 and has performed on three continents and over fourteen countries with his roster rapidly growing.

In conjunction with gracing the main stages of some of the finest psychedelic trance festivals including: Ozora, Freqs of Nature, Modem, Hadra and Masters of Puppets, LAB has established a distinct sound for himself and his fans that is constantly evolving whilst preserving his usual tendency to create mental twisting leads, futuristic atmospheres, unique breaks and full power driving themes.