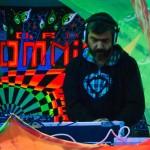 The man behind Kulu project is Dimitri K. from Thessaloniki, Greece.

He fell into music at a young age, had influences from multiple music styles and scenes.

Around 1996 he starts mixing psy-trance, and appears already in parties, which definitely makes him one of the oldest DJs of the scene here.

Later on he becomes also a significant producer, renowned for his participation in Metallaxis, a project anybody will remember, which was formed by Romolo (Polyphonia) and him around the year 2003.

Finally in the year 2005, some of his solo releases are published and the Kulu project is official productionwise.

He has a long story behind him, he also travelled and played abroad a lot.

Some of his important performances include Boom festival, Forgotten Ritual and Psycrowdelica, but also a big variety of parties nationally and internationally.