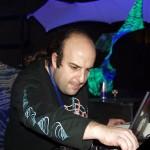 Polyphonia is Romolo Cheri, a psy-trance DJ and producer from Thessaloniki, Greece.

He started producing electronic music in 2003 and has been listening to trance music since 1994. He also collaborated with Kulu in making psychedelic with the name Metallaxis. He started to concentrate hard on his trance project Polyphonia which he started in 2005. His sound is constantly evolving and he is always pushing boundaries. He released “Future World” album with Insomnia Records in 2008.

Romolo died in 2010 (July) because of a fatal motorbike accident. In 2011 his postmortem album “Beyond the Ocean of Time” was released by Quantum Frog Productions.

A pioneer of psychedelic music, Romolo will always be remembered for his signature thundering and out-worldly sound design. He unleashed auditory behemoths over the years through his performances across the world. Through his art, Romolo will live on forever, and his legacy of sound will tear through generations to come.