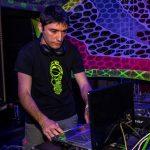 Tromo Aka Yiannis S. was born in Athens.
His first contact with music production was
during his young age studying guitar and synthesizer. After many attempts with
rock and metal bands he realized that something else is his fate. Around 1997
he discovered the magic in electronic sounds and the Psytrance rhythms after
going to parties and festivals around Greece and Europe. Having the
experience and influence from the dark scene, he created Tromo and had
his first release in Mighty Quinn records at 2008. In nowadays, he collaborates
with Drury Nevil as Ohminside and with Antonymous as Quadraphonic