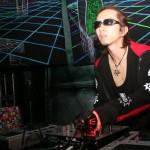 Savage Scream is a solo project from Mizuki Nishihata. Mizuki from Japan will go far and make a lot of people freak out! He appeared twice on Insomnia compilations. Beside his solo projects he has many other projects in collabaration. This is real underground stuff from the land of the rising sun. Currently he is working on a project Scaltinof, already released several tracks with well known labels.