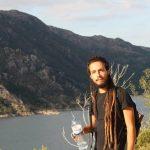 Spectralviewer is the project of darkpsy and forest created by tiago andre that took place in the year 2011.

His first contact with the psychedelic music was in 2000 with 10 years of age, and since then he was amazed by its magic and its power . Later it began to produce its first tracks and since then it has evolved until reaching the perfect tunes and the necessary components to create his own style. His music consists of strong basslines and dark environments that lead the listener through a wonderful psychadelic journey. He has already released some tracks in some compilations with several artists and hopes to continue to evolve and transmit his message through his sounds