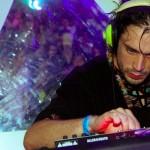 The oCeLoT project began in the year 2000 and has been heard rocking dancefloors in over 50 countries on festivals and parties worldwide. A discography of 9 albums and over 150 singles ranges from chillout and ambient music through all stages of trance from daytime and morning sounds until the deepest night. Aaron Peacock (oCeLoT) has produced electronic music since 1993. oCeLoT music is characterized by a driving energy, a rich range of sounds, intelligent progressions, and a constant evolution in themes. Never boring, often iconoclastic, it pushes you into a higher state of consciousness.


Check us out on
social networks