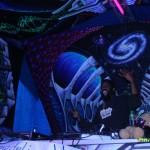 Mubali is the musical project of Greg Farley, originally based in Monterey, California. He came from a classical music background, due to playing viola for 9 years in school, as well as a funk and soul upbringing. He has been involved in electronic music as a whole since 2000, after being converted to the dj culture by Burning Man and Dj Dice. After a short stint of being a Drum and Bass dj, he was enticed into the land of psychedelic trance by Djs Michael Liu and Hidroponik (A.K.A. Arahat ). Around spring 2001, Mubali was born as a dj. He specialized in the heavier end of psychedelic trance with a slightly techy influence. As a dj he was into the French, Russian and Danish sounds happening between 2001-2003, as well as being an avid supporter of local San Francisco producers like Ocelot, Random, Ghreg on Earth, Chromatone, The Fractal Cowboys, and Penta.

During a heated discussion with Ocelot, Mubali expressed his displeasure of the direction the music was going and thought that nothing coming out really represented what he really felt inside. This led to 5 words that changed his viewpoint forever, ?Do it yourself then dammit! From that point Mubali dedicated himself to learning production and trying to express what was inside of him. That was August 2003.

Since then, Mubali has performed on stages all around the world and at many festivals, including Boom Festival and Full Moon Festival. He has 2 album releases on Trishula Records and countless solo and collaborative works on many other labels. His style can be described as sometimes funky and bouncy, sometime chunky and nasty, but always psychedelic. Currenly, Mubali is in the process of getting into music school in Denmark, and working with several of the Parvati records artists in the never-ending quest to keep his sound fresh and relevant. He currently has a few projects, two with other established artists, and one solo side project. His project with Arahat, named Arabali has existed since 2006 and they are on their way to creating their debut album. His other project with Onkel Dunkel is named Speakerhuggers.