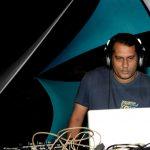 Brian Fernandes aka Kerosene CLub / Flipknot /Fibre Stomp is one of india’s most respected trance composer/dj with a fan following spread all over the world.His sets are legendary as well his diverse taste in other genres of music.His Versatility lies across his different styles .He can send you into the deepest realms of existence to the most pleasant journeys one can embark on .One of the few versatile Indian electronic musician who is constantly touring and spreading his sound to the four corners of the world.A Slight peak into his main occupation revolves around manipulating sound frequencies to influence one’s brain and one’s kneecap and testing it on human specimens in places like India,Japan,Russia,Brazil,Germany,Portugal,Australia ,Greece,Switzerland Belgium,Spain,Dubai,Nepal etc .He has performed at the Boom Fest,Universo paraello ,Ozora,Full moon Fest,Psycrowdelica,Sol Fest etc.. Constantly touring,he is spreading the temple twisting sound like wildfire.He also is owner of constantly active labels like Temple Twisters(Psychedelic ),Digital Distortion Records(Full on ) and the unseen force behind Tremors undergound Productions and Air Snare records.Discovering fresh talent and giving them a platform along with the seasoned stars of the ever-expanding roster of musicians.He is involved also in side projects full on – Fibre Stomp and a progressive/chill out avatar as Brianoid .