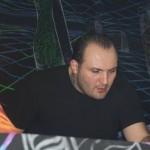 Fabio and Karim are 2 French artists and friends based at Paris. They meet each others in 1996, while from 1993,in underground trance period, both of them,are part of DROIDSECT crew with Luc & Julien from Digital talk, Raphael (Datakult) and many more..

Jellyheadz is an alchemy between 2 alien’s brain.

The project was born in 1996, from the beginning, Fabio and Karim developed a very massive, twisted, groovy, deeply nervous, and totally underground psychedelic music. With passing years, their talent and their style are confirmed,they keep that anti-establishment and revolutionary mind spirit which is peculiar to both of them. Jellyheadz concept is still strongly engaged.

JELLY: Karim discover techno in 1990 when the movement explore the “night circle” of Paris (Boy’s, Palace, kit kat…), he was also very present in hip hop and funk sound system… and then he discover trance stage in 1993.

Jelly was an inevitable member of the french trance underground on that period (party promoter, deco). He started to compose trance music with a Spanish friend in 1993. End of 1999 he joined Raphael and formed DATAKULT, Jellyheadz project was created with Fabio in 96.

Several different project with Karim have seen the day from that date as “THE MANY FACES” with DEJAN, BABA JELLY which is Karim’s own project, and more recently VICIOUS ALCHEMY with Virginie (Djane CHRYSALID).

HEADZ: as Karim, Fabio discovered the techno movement first, in UK in 1990, then he learned to mix and become an inevitable techno and Drum&Bass Dj… during 10 years Fabio played at many party’s in France and in some other countries, trance is part of him from 1993.

In 1994, it is SaId Acher, eminent member of “DENSHI DANSHI” from POF records (one of the first French trance projects) with whom Fabio started to learn the music, later he joined “CYCLOID” project with Julien (Digital Talk), and Raphael Befort (Datakult), and finally, Jelly Headz was formed in 1996.