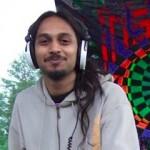 Alien Mental a.k.a Sonik Scizzor is La, from Chennai (South India); currently living in a Spacepod near Earth. He started his audial voyage playing in many different bands; metal, punk, jazz, fusion and is a multifaceted musician well versed with instruments such as guitars, drums, bass and more. When he heard the rising contrasts and innovations behind electronic music he landed in San Francisco starting to experiment with trance music with his project called Braindrops. After further innovations he started Alien Mental, a project geared towards pushing the boundries of Goa / Psy trance and fusing different genres of music together.

Sonik Scizzor is a whole new take on the trance genre with influences from idm, drum n bass, breakcore, funk and others. Playing with lightning fast harmonics, high tempos and intelligent rhythym patterns he aims to push the envelop of sound to a whole new level. Having met Zik a.k.a Horror Place in a performance in Burning Man, the bonding friendship soon resulted in yet another project called ” Jibber Jabber ” which fuses the signature writing styles of both.

With numerous singles released on record labels like Tantrumm Records, Drop Out, Quantum Frog, Namaha, 5th Element, Vertigo, Golden Dawn, Mistress Of Evil and many more, He released his debut album on the acclaimed trance label Insomnia Records in winter 2007; “Alien Mental – Mind Hack”. Today La, is considered one of the important figures in psychedelic trance music and successfully travels and performs on Earth. As the label owner of Echo Vortex Records he is committed to broadcasting cutting edge electronic music to the listeners worldwide.