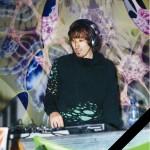 Once, he has found himself in the middle of nowhere covered by a wave of something very smooth and boundless. It is a big challenge to find words to describe this feeling. Some people say that it is eternity and unity with everything around, Sasha was feeling like everything in this particular moment.

When the wave got down a bit, MoOka realised that he is enjoying a night on one of the beautiful Goa dancefloors where he heard magical psychedelic trance. Magic was around, stars in the sky and wonderful creatures. Since that time MoOka got connected and started to create vibrations inside himself by playing DJ sets and making his own music.

We believe that you will enjoy the spirit and vibe of his music as we do and it will live in the hearts forever, timeless.