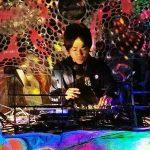 Psychedelic trance producer Gu a.k.a Takumi Yamaguchi was a born in Japan.

In 2004 he wondered onto the Indian sub-continent, and stumbled into Goa, completely unaware that he was about to have his life changed. In Goa he had his first encounter with this thing know as Trance Music.

After dancing at a couple of parties he decided to become a DJ.

He is heavily influenced by sound by all psychedelic music in the world.

In 2006, with the aid of DTM he wanted to create an original sound, when he started to produce his own music, dark sounds with groovy bass lines being his signature.